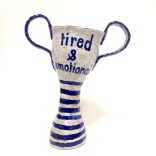 Statement:  “This Charming Man” is an exhibition of functional ceramic vessels, including whisky, wine, coffee and tea cups, as well as experimental sculptural work investigating the complexities of an overwhelmingly ‘masculine’ sports culture within Australia.

Jacobs has contrasted traits typically valued within sports, such as “Hard” or “Tough”, with sentiments such as “Fallible” or “Gentle”, which are inscribed on ceramic trophies and garden planters. Some trophies list hyper-specific achievements, like “Adept With Power Tools”, or “Awesome at Sleeping”.

Jacobs has also hand-made tributes to mass-produced “World’ Greatest Dad” or “Gone Fishing” mugs, as well as a series of tasteful whisky and wine tumblers.

No Such Thing as Social Sport (Antony DiMase Architects)

“One Trick Pony” and “Weak as Piss” for Antony DiMase gallery 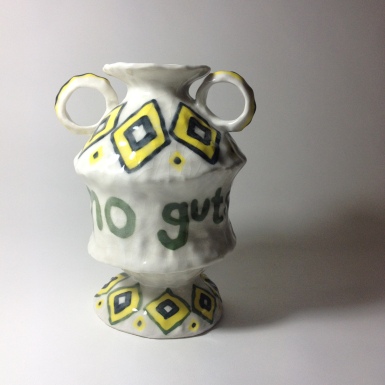 “No Guts No Glory”

“No Such Thing as Social Sport” investigates the sporting rituals of Australia, revealing a cultural obsession that borders on fetishistic. Katie’s father once broke a low-hanging light while cheering for an Essendon victory goal.

For this exhibition, she has focussed on collecting sporting language and sayings used by sports fans, commentators and players. Katie’s indoor soccer teammate Alex once told her in no uncertain terms, that there’s “No Such Thing as Social Sport”. She uses the vehicle of the trophy – a symbol of sporting achievement – to highlight invisible structures underlying sports culture, revealing what sentiments we value within and beyond this arena. 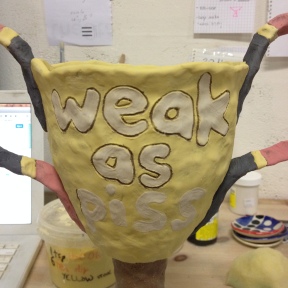 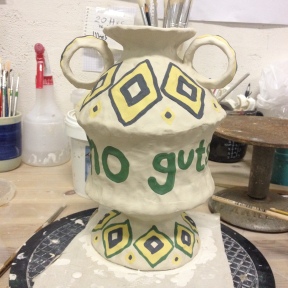 “No Guts, No Glory” part of a series of trophies examining statements of achievements (in progress)

“No Guts, No Glory” part of a series of trophies examining statements of achievements (in progress) 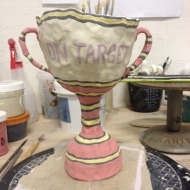